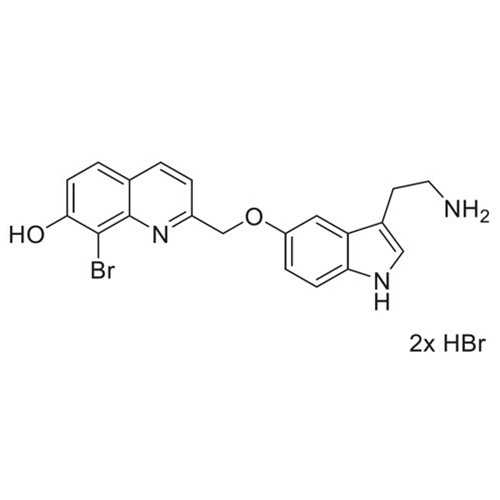 BHQ-O-5HT is a photoactivatable form of the neurotransmitter serotonin (5-HT) that is activated with either 1-photon excitation (1PE) at 368 nm or 2-photon excitation (2PE) at 740 nm in a biological preparation, such as cell culture, tissue slice, ex vivo brain, or whole animals.

Serotonin (5-HT) is a neuromodulator involved in regulating mood, appetite, memory, learning, pain, and establishment of left-right (LR) asymmetry in embryonic development. BHQ-O-5HT is a "caged" 5-HT molecule, that, upon photoactivation, releases 5-HT, enabling temporal control of the release of 5-HT within a biological system. BHQ-O-5HT depolarized sensory neurons when photolyzed in culture and in larval zebrafish comparable to that observed by 5-HT by itself. The quantum efficiency (Qu) of BHQ-O-5HT·2HBr for 1-photon photolysis is 0.40 at 365 nm in KMOPS buffer at pH 7.2. The 2-photon uncaging action cross-section (du) is 0.50 GM.

From the laboratories of Timothy M. Dore, PhD and James D. Lauderdale, PhD, University of Georgia.

Provided in salt form is for increased dry storage stability and easier handling.

Recommended dilution is 100uM at physiological pH. For best results, prepare solutions immediately prior to use. A stock solution in DMSO stored at -20C and in the dark has a reasonable shelf life. Once in aqueous enviornment, protect from light. Work under red light while handling the compounds before and during use.