LOBSTR (low background strain) is an E. coli strain for the expression of recombinant polyhistidine-tagged proteins. This strain has been optimized for one-step downstream polyhistidine-tag affinity purification and is ideal for poorly expressing proteins.

A major drawback of polyhistidine-tag affinity purification of proteins expressed in E. coli is the presence of naturally histidine-rich proteins, resulting in co-purification of these contaminants. In LOBSTR, ArnA and SlyD, the two most common E. coli contaminants have been modified based on surface engineering. LOBSTR maintains normal cell growth but significantly reduces the polyhistidine-tag binding affinities of ArnA and SlyD. Compared to other expression strains, LOBSTR yields recombinant protein of higher purity, allowing for one-step purifications of low expressing recombinant proteins.

From the laboratory of Thomas U. Schwartz, PhD, Massachusetts Institute of Technology.

Notice to Buyer/User: The buyer/user has a non-exclusive license to use this product for research purposes only. For commercial use of this product, both non-profit and for-profit buyers and users should contact us to inquire about a license from New England Biolabs, Inc. 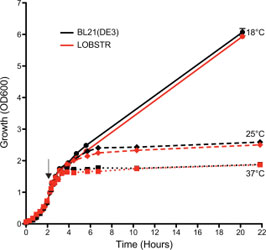 The growth (OD600) of both LOBSTR and the parental BL21(DE3) strain was measured from initial synchronization at 0 h until the final harvest. Both strains carried the same expression plasmid and were grown at 37C until an OD600 ~0.7, at which point protein expression was induced at 18, 25, and 37C (black arrow). The growth curves for LOBSTR and BL21(DE3) are shown in red and black, respectively. Cell growth during log phase and final cell density was similar for both strains. Depending on the expression plasmid different growth behavior was observed, but typically no growth difference was seen between LOBSTR and BL21(DE3).

ArnA and SlyD are eliminated from His-tag purifications from LOBSTR

Elution samples of test purifications from BL21(DE3) and LOBSTR using common metal affinity resins are shown. (A) Seven protein constructs were purified from both the parental BL21(DE3) strain and LOBSTR using Ni Sepharose 6FF resin (GE Healthcare). The constructs are numbered 1-7, and contain either a 6×His-tag (1 and 4) or a 10×His-tag (2,3,57). The elution samples were run on an SDS-PAGE gel and stained with Coomassie Blue R250. ArnA and SlyD are indicated by arrows and target proteins indicated with a black circle (). The double asterisk (**) indicates Hsp15, another protein showing reduced Ni-binding affinity in LOBSTR. (B) Purifications of constructs 1 and 5 from BL21(DE3) and LOBSTR were also carried out on two additional commonly used resins, Ni-NTA (Qiagen) and Talon (Clontech). In each case, ArnA and SlyD are successfully eliminated in LOBSTR.

Provider
From the laboratory of Thomas U. Schwartz, PhD, Massachusetts Institute of Technology.
Comments