The plasmid pVSV-ΔL-GFP encodes the antigenomic-sense (or positive-sense) RNA of a non-replicating recombinant vesicular stomatitis virus (rVSV) minigenome in which the polymerase (L) gene has been replaced with GFP. This plasmid is used as a transfection control in VSV recovery experiments as described in [1]. The antigenomic RNA of ΔL-GFP is expressed from the bacteriophage T7 promoter in pBS, which has been further modified to contain the hepatitis delta ribozyme used to generate a precise 3' end of the VSV antigenomic RNA and a T7 terminator sequence cloned between the SacII and SacI restriction sites in pBS-SK+ [2, 3]. The reverse genetics method used to recover recombinant VSV (rVSV) from plasmids involves the transfection of vaccinia-T7 infected cells with 4 to 5 different plasmids; one that expresses the rVSV antigenome and 3 (or 4) other plasmids that express the VSV N, P, and L proteins (or N, P, L and G proteins if recovering a replication-restrictd ΔG-VSV).

Recombinant vesicular stomatitis virus-ΔG (rVSV-ΔG) has been used to produce VSV pseudotypes containing the envelope glycoproteins of heterologous viruses including viruses that require high-level containment. Since the infectivity of rVSV-ΔG is restricted to a single round of replication, analyses of viral entry can be performed using just biosafety level 2 (BSL-2) containment. 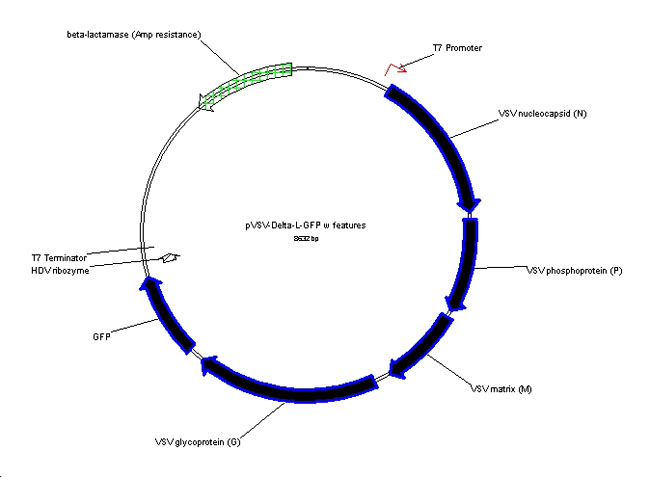