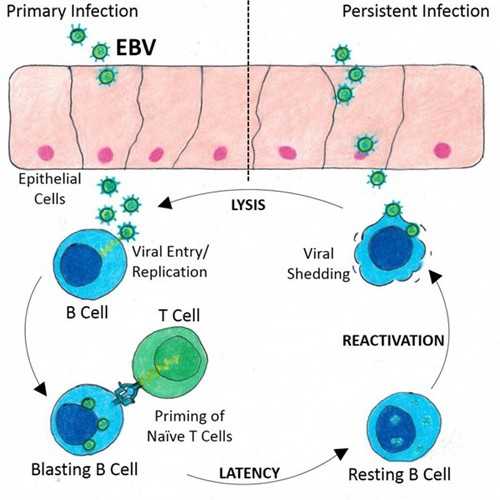 This mouse IgG2a monoclonal antibody recognizes Epstein-Barr virus (EBV). This antibody has been shown to be superior to common, CS1-4 cocktail-based antibodies.

Latent Membrane Protein 1 (LMP1) is the dominant oncogene expressed by Epstein-Barr virus (EBV). It is expressed in the plasma membrane of transformed B cells latently infected with the virus. It is essential transformation by EBV. It is found in EBV positive tumors including immunoblastic and Hodgkin’s lymphoma and nasopharyngeal carcinomas.

From the laboratory of David Thorley-Lawson, PhD, Tufts University. 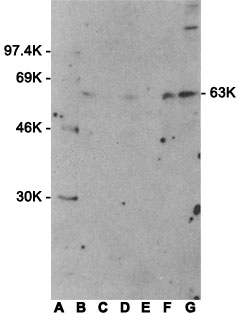 Western blots were performed with the S12 monoclonal antibody. The following subcellular fractions of the cell line BH were tested for the presence of LMP1: plasma membranes (lane B), cytoplasm (lane C), endoplasmic reticulum (lane D), mitochondria (lane F), and nucleus (lane G). In lanes B and D, 25ug samples of protein were used, and in lanes C, F, and G, 50ug samples were used. Lanes A and E contain 14C-labeled molecular weight standards and no material, respectively.