The plasmid pVSV-ΔG-N/P-MCS2-2.6 encodes the antigenomic-sense (or positive-sense) RNA of a replication-restricted recombinant vesicular stomatitis virus (rVSV) in which the glycoprotein (G) gene has been deleted and replaced with a multiple cloning site (MCS-1) containing the following restriction enzyme sites (5'-MluI-KpnI-NheI-3') which are unique in the plasmid. It also contains an additional transcription start-stop sequence between the N and P genes, which has a second multiple cloning site (MCS-2) that has sequences for the enzymes (5'-AscI-NotI-AvrII-3'). These are also unique in the plasmid.

pVSV-ΔG-N/P-MCS2-2.6 can be used to insert two heterologous genes for expression from the VSV genome. For example expression of a heterologous glycoprotein from MCS-1 and expression of a cytokine or a reporter from MCS-2. When recovered, these viruses would be useful for vaccine studies, use as reporter viruses for high-throughput antiviral drug screening, or in identification of host entry factors as described in [1].

This plasmid is used together with plasmids encoding the VSV nucleocapsid (N), phosphoprotein (P), glycoprotein (G), and large polymerase subunit (L) to recovery VSV-G pseudotyped ΔG-virus as described in [1]. The antigenomic RNA of ΔG- N/P VSV is expressed from the bacteriophage T7 promoter in pBluescript, which has been further modified to contain the hepatitis delta ribozyme used to generate a precise 3' end of the VSV antigenomic RNA and a T7 terminator sequence cloned between the SacII and SacI restriction sites in pBS-SK+ [2, 3]. 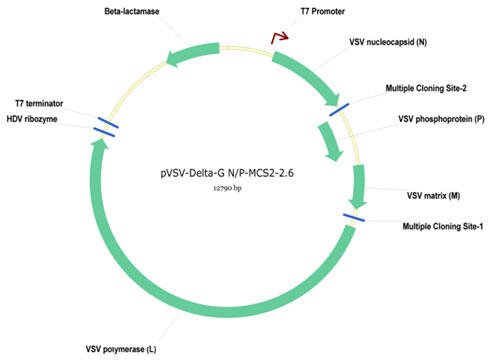 Provider
From the laboratory of Michael A. Whitt, Ph.D., University of Tennessee.
Comments