This range of mouse monoclonal antibodies was generated against purified recombinant human Osteopontin (OPN) and recognizes epitopes throughout OPN.

Osteopontin (OPN, also designated Bone Sialoprotein 1, Urinary Stone Protein, spp-1, eta-1, nephropontin, uropontin) is a phosphoglycoprotein synthesized in a variety of tissues and cells. It was originally identified as a bone matrix protein and subsequently as a cytokine produced by various immune and transformed cell lines. OPN is a biomarker for various types of cancers and inflammatory diseases. Excessive or dysregulated OPN expression has been linked to the pathogenesis of both autoimmune disorders such as multiple sclerosis, systemic lupus erythematosus, rheumatoid arthritis, atherosclerosis and other inflammatory diseases including cardiovascular disease, chronic obstructive pulmonary disease, inflammatory bowel disease, liver disease and asthma.

From the laboratory of David T. Denhardt, PhD, Rutgers University.

Not sure which antibody is right for your research? Try our Osteopontin Antibody Sampler Pack! 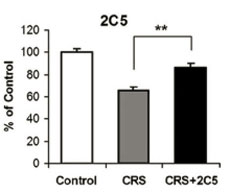 Tissue culture treated 96-well plates were coated with 150 uM human recombinant his-tagged OPN, then blocked with 1% BSA. Antibodies were then added at 125 uM and allowed to bind OPN for 2 h. The wells were then washed and 5 x 104 MDA-MB-435 (A) or 275-3-2 (B) cells were added and allowed to adhere for 3 or 3.5 h respectively. Non-adherent cells were removed by washing and adherent cells were quantitated by staining with crystal violet. Data are representative of four independent experiments for the MDA-MB-435 cell line and two independent experiments for the 275-3-2 cell line (n=4). *P<0.001 Students t-test.