The plasmid pVSV-ΔG-GFP-2.6 encodes the antigenomic-sense (or positive-sense) RNA of a replication-restricted recombinant vesicular stomatitis virus (rVSV) in which the glycoprotein (G) gene has been replaced with a multiple cloning site (5'-MluI- XmaI-SmaI-EagI-NheI-3') and that contains an additional transcription unit between the MCS and the L gene that encodes GFP. This plasmid can be used to construct replication-competent viruses that encode a heterologous glycoprotein expressed from the MCS transcription unit. This plasmid is used together with plasmids encoding the VSV nucleocapsid (N), phosphoprotein (P), glycoprotein (G), and large polymerase subunit (L) to recovery rVSV as described in [1]. The antigenomic RNA of the virus is expressed from the bacteriophage T7 promoter in pBluescript, which has been further modified to contain the hepatitis delta ribozyme used to generate a precise 3' end of the VSV antigenomic RNA and a T7 terminator sequence cloned between the SacII and SacI restriction sites in pBS-SK+ [2, 3].

Recombinant vesicular stomatitis virusΔG (rVSV-ΔG) has been used to produce VSV pseudotypes containing the envelope glycoproteins of heterologous viruses including viruses that require high-level containment. Since the infectivity of rVSV-ΔG is restricted to a single round of replication, analyses of viral entry can be performed using just biosafety level 2 (BSL-2) containment.

Specifications
Provider
From the laboratory of Michael A. Whitt, Ph.D., University of Tennessee.
Comments 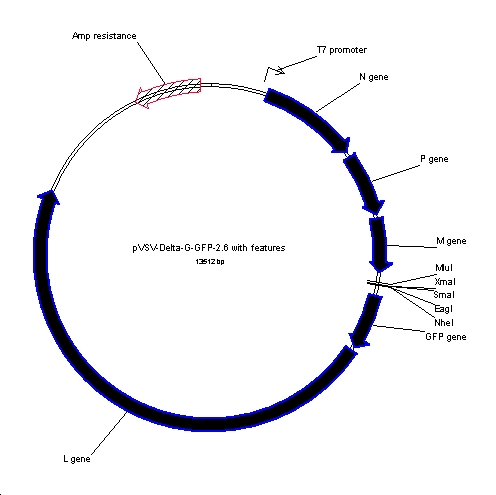