Ubiquitination is a highly diverse and complex post-translational modification for the regulation of protein function and stability. Studies of ubiquitination have, however, been hampered by its rapid reversal in cell extracts, for example through the action of de-ubiquitylating enzymes (DUBs). MultiDsk allows for the capture of pure, native, nontagged, ubiquitinated proteins from cell extracts whilst helping ensure the maintenance of the normal ubiquitination state via a strong protective function, inhibiting de-ubiquitination.

From a laboratory at Cancer Research Technology.

(A) MultiDsk binds ubiquilated proteins. 2 mg of yeast whole cell lysate was incubated with glutathione agarose beads. Differing amounts of GST protein, alone or asa mixture with GST-MultiDsk, were mixed with so that equal amounts of total protein and bead bed volumes were used in the comparison. Final concentration of MultiDsk protein in the pull-down is indicated. Western blot was performed using antiubiquitin antibody. (B) MultiDsk offers substantial protection against protein de-ubiquitination. Extract from strain W303 - expressing Myc-tagged ubiquitin was incubated with GST protein alone (negative control), 2mM n-ethylmaleimide [NEM] (positive control), or MultiDsk, as indicated. It was then left for 0, or 6 hours at 30C, prior to Western blot analysis using anti-ubiquitin antibody to detectubiquitylated proteins.

Comparison of Protection of Poly-ubiquitin Chains in Extract

Extract from strain SUB592 was incubated with equivalent amounts of GST, GST-Dsk2, commercially available TUBE-1, and MultiDsk and incubated at 30C for the indicated time. Total protein extracts were subject to Western blot and probed using anti-myc antibody. 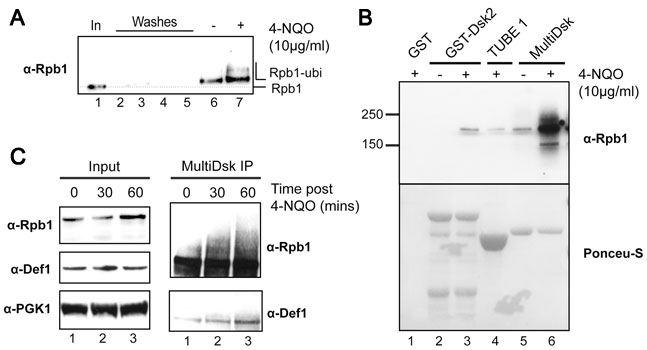 Provider
From a laboratory at Cancer Research Technology.
References