Vascular endothelial growth factor (VEGF) is a potent angiogenic factor, and its expression is induced by hypoxia. VEGF also possesses a non-angiogenic role important for the cardiovascular system. For instance, it can promote differentiation of stem cells into cardiomyocytes and endothelial cells, and boost the function of mesenchymal stem cells and endothelial progenitor cells. These activities of VEGF are mediated in part through the AKT signaling transduction pathway. In humans, alternative splicing from the single VEGF-A gene gives rise to multiple VEGF splice variants encoding 121, 145, 165, 189, and 206 amino acids. All isoforms contain a signal peptide sequence, but only the VEGF121, 145, and 165 species are secreted and readily diffusible presumably due to the absence of a putative heparin-binding domain.

From the laboratory of Te-Chung Lee, PhD, University at Buffalo. 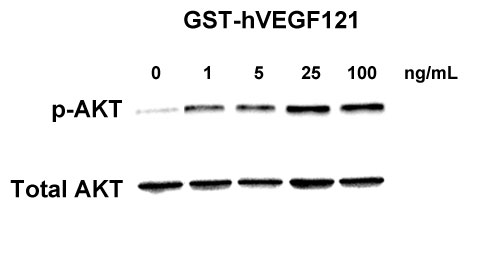 VEGF activity as assessed by its ability to activate AKT (phosphorylation of Ser473). The figure shows GST-VEGF121-mediated activation of AKT in cultured C2C12 myoblasts after VEGF treatment. Cells were serum-starved overnight, treated with the indicated concentrations of GST-VEGF for 30 min, and harvested for Western blotting analysis. The figure shows that maximum stimulation of AKT was achieved at a GST-VEGF concentration of ~25 ng/ml. This concentration was also found to stimulate cell proliferation.

Provider
From the laboratory of Te-Chung Lee, PhD, University at Buffalo.
References